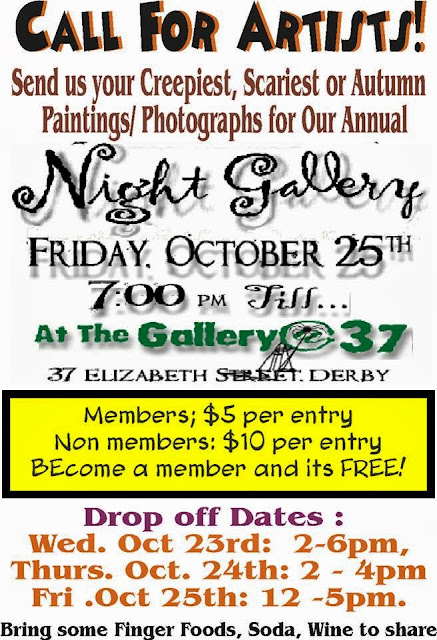 Email ThisBlogThis!Share to TwitterShare to FacebookShare to Pinterest
Labels: autumn, call to artists, Gallery at 37, show

Artists have fun with food, cook up 'Delicious!' works

Show in Derby restaurant was a hit

DERBY - Our Sept. 26 art exhibition, "Delicious!" was a smashing success!
More than 150 artists and art lovers packed Marco Pizzeria & Restaurant and experienced
some great art and tasted some great food.

The juried show attracted more than 55 entries. The competition was fierce; there were many "high caliber" entries ranging from photographs to oil paintings.
Some pieces just dominated the hall. Greg Karas' painting, "Corona and Lime," and Steve DiRienzo's classic "Baked Ham and Potatoes," both made your mouth water.

Four paintings were sold before the night was over.
The show attracted many new artist members to the ever growing ranks of the Valley Arts Council. Judges were the family owners of Marco Pizzeria who graciously offered their beautiful
restaurant and catering for the show.
They painstakingly scrutinized every entry. In the end it ended up a battle between two Valley Arts Council members who both happen to belong to the Derby Senior Center.

Wallace Slove's masterpiece "Apples in a Blue Bowl" won the coveted "Best in Show" Award
along with a $50 gift certificate!
In addition, this was also the first time that we, or any other arts organization in the region, had ever
attempted a "People's Choice Award."

Attendees were asked to cast a ballot for their three favorite works. The paper ballots jammed a makeshift ballot box. More than 165 votes were cast!

The results were compiled a few days later and counted by the Delicious! Committee.
First place with 53 votes, went to my painting "Honey Bun!"
Second place, with 35 votes, went to Francesco Tobacco for his painting, "View from La Cocina." There was a tie for third between two photographers: Keary Nichols for "Peaches" and Patricia Villers for "Strawberries."
Honorable mention went to two sculptural pieces which were the talk of the evening.
They were: Floatin' Fred's provocative work, "Fast Food Junkies," which cleverly featured McDonald's French fries as hypodermic needles nestled in their container; and George Pudimat's humorous experiment with twisted utensils titled "The Trouble Between Forks N' Spoons,"  which had everyone smiling and having a great time.

Owners of Marco Pizzeria would like to make this an annual event...and we look forward to that.