Valley Arts Council President Rich DiCarlo has put his entry for the upcoming "Celebration of the Circle" show on the wall in the Gallery@37, 37 Elizabeth St., Derby.

Come see how the arts council members have interpreted the circles theme.
Posted by Patti at 5:37 PM No comments:

Celebration of the Circle is just around the corner 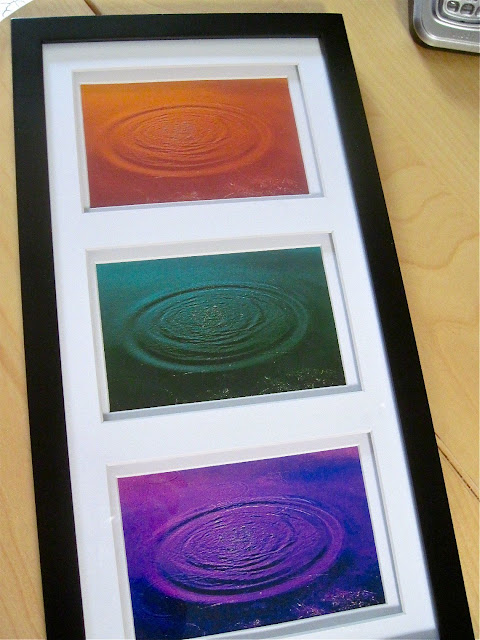 Artists: Have you come up with a piece of art featuring circles yet for the Celebration of the Circle?


The Valley Arts Council's next show that pays homage to the lowly circle is fast approaching.


Reservoir ripples is what I call this entry. It reminds me of flying saucers somehow.

At Sterling Opera House in Derby


Painter and craft artist Heather Dailey-Mezzacappa created a series of three striking portraits of Lon Chaney Sr. for the Valley Arts Council's Sterling Opera House Portrait Project.
Her paintings feature him in character as the famous “Phantom of the Opera” and as the tragic clown in “He Who Gets Slapped”.


The third and largest of the three is of the famous “Man of a Thousand Faces” as himself, in a seldom seen moment out of character.


Together the three portraits, done in acrylic on canvas, fill the window space and are quite eye-catching.
“I’m a huge fan of the classic horror genre,” Dailey-Mezzacappa said. “What drew me to the character the most was the fact that he literally suffered for his art.”


That is a nod to the fact the Senior Chaney endured grueling hours under heavy prosthetics and makeup, which contorted his features causing great discomfort and pain, all for the sake of his audience, she said.


“Ironically, most of the characters he played were grotesque, flawed creatures on the outside, but yet very human and genuine beings on the inside,” Dailey-Mezzacappa added.


“Another little known fact is that both of his parents were deaf,” she said. “This aided his acting abilities in the silent films of the era because he knew the art of communicating without speaking.”


All of these traits added up to make the actor just as interesting as the roles he played, she said.
Posted by Patti at 5:13 PM No comments:


The rentals have "reasonable rates, 24-hour access, and they're secure," he said. The price includes all utilities.


Artists renting the spaces will be part of a creative atmosphere and will be meeting like-minded people, he said.


The spaces are for art only, DiCarlo stressed, and not for residential use. 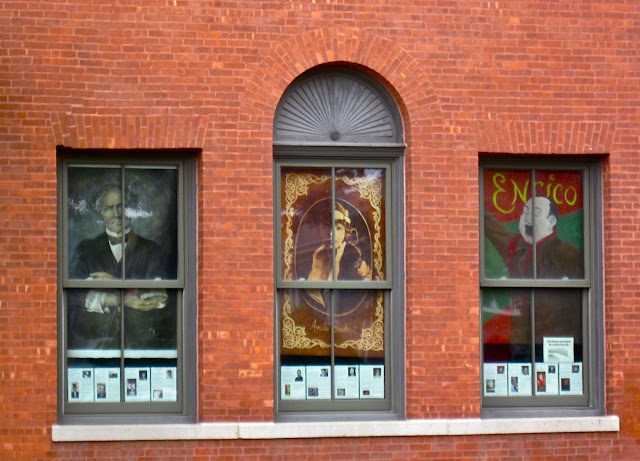 I snapped a quick photo of Harry, Amelia, and Enrico the other day as I was walking across the Derby Green.


They are part of the Sterling Opera House Portrait Project. Houdini was painted by Greg Karas of Ansonia, Earhart was created by Susan Carden-Flicker of Shelton and Caruso was painted by Rich DiCarlo of Derby.


Stay tuned for more information about the artists and their work.

These portraits are Sterling


DERBY - This is a continuation in our series of interviews with our group of very talented artists who contributed to the Sterling Opera House Portrait Project.

Shelton artist Jerry Mulcahy, who chose Bob Hope as his subject and created him in the style of Shepard Fairey’s “Obama Hope Poster”, said he was “struck by boyhood memories of “seeing Hope on television and in vaudeville style comedy skits.”


He added that as he got older he developed a sense of “pride in seeing Hope perform for the Troops on multiple USO Tours!", which was something he felt was a “selfless act on the part of a big celebrity”.

Her connection to Berle also came from her childhood days spent at her grandmother’s house where everyone gathered around the TV to watch “this really funny guy.”

“Uncle Miltie” became somewhat of a fixture and to this day evokes fond memories of her grandmother, Datcher said. “I captured his likeness in-between … not quite young and not quite old,” she said. "It’s the way I remember him.”

Deneen also says she was “excited and enthusiastic” to take part in the project. “I love the fact that this will hopefully help others learn more about this part of history.”


Karen Loprete of Shelton created a beautiful fiber art rendering of Gracie Allen. She said she has always admired Allen for being a “powerful woman” for her time and one who really “stood up to her man.”

She also pointed out that Gracie Allen seemed to “always be smiling” and that even after the breakup of the “Burns & Allen” act, she still managed to “attract great recognition on her own.”


He told them how to show emotion through their artwork, and then urged the kids to draw themselves. 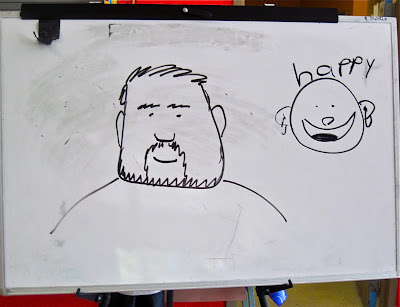 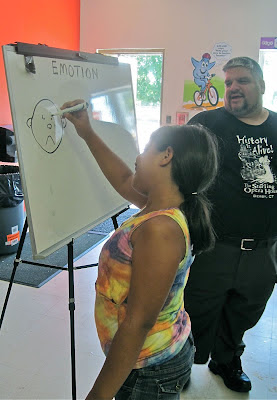 The theme of the day Tuesday was "emotion." DiCarlo encouraged the 50 students in the class to draw happy, sad, and mad faces. 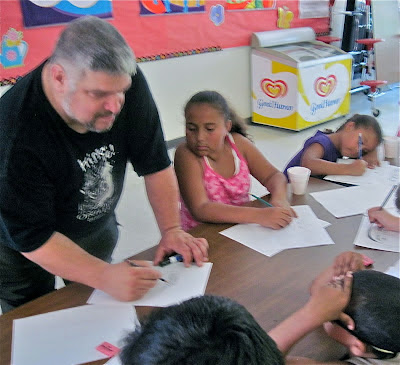 They finished the class by creating self-portraits. DiCarlo said he was impressed at how well the children were able to capture themselves on paper. 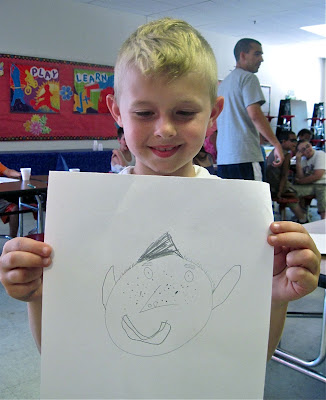 This budding artist, Jackson Kellogg, 8, of Derby, proudly shows off his self-portrait. 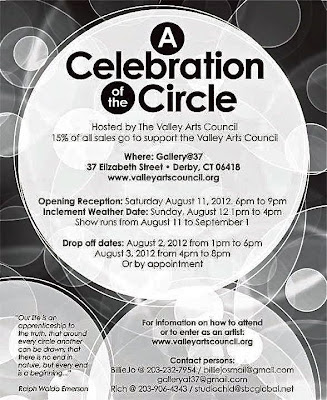 For information on entering the Aug. 11 show visit www.valleyartscouncil.org.

Gallery gets lots of visitors at fireworks event 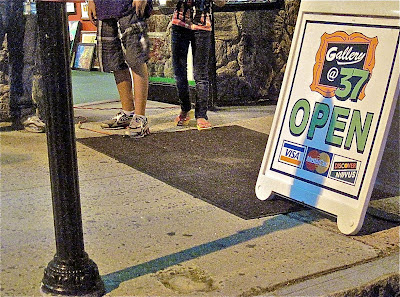 It was good to see that the Gallery@37 was getting a lot of foot traffic last night before and during the Derby-Shelton fireworks display. I hope visitors were impressed and plan to stop by again soon.


This was the scene from right outside the Gallery ~ 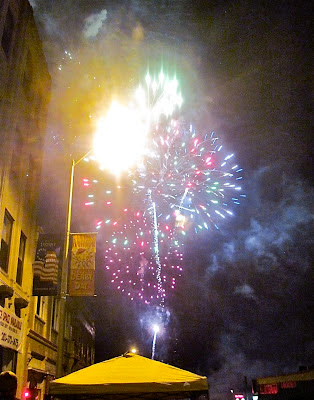 If only the city could have turned off the street lights during the display. But I suppose that would be a public safety concern. 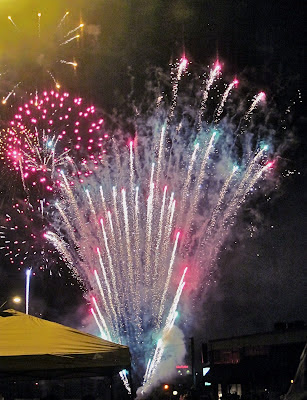 Here's to a happy and safe Fourth of July! See you at the Gallery!
Posted by Patti at 9:53 AM No comments: